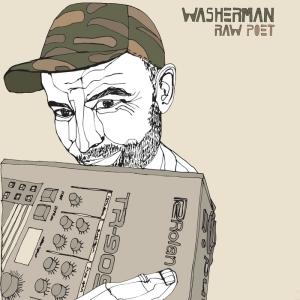 Drenched in raw old-school goodness, Washerman’s debut full-length album ‘Raw Poet’ out now on Drumpoet Community has been one of the most anticipated records of the year as far as the Deep House and Techno communities are concerned. Washerman’s sound is certainly rooted in the nineties old-school sound that is all over the place right now but his work retains a gimmick-free quality to it which just keeps it relevant to the modern day dancefloor.

Opening out is the upfront ‘Morning Dew’ which really kicks hard yet retaining an overall Deep-House vibe. ‘Solitaire Deepness’ feels like classic, dubby nineties Deep House, reminiscent of Airtight recordings. ‘Distant Planet’ feels related to the prior track yet it retains a voice of its own before ‘Superstring’ further drives home that nineties influence with looping strings and piano. ‘Sneaker Girlz’, my personal favourite track and one of two tracks in a separate EP release kicks hard again and leans more towards the Detroit Techno sound.
With ‘Dub Chord’ Washerman continues to place an emphasis on the kick drum, adding a bouncy bassline and more raw old-shool keys. The brilliant ‘Aries’ and ‘Siren Chords’ return down the Techno route with the latter being a real album highlight. ‘Belts Of Orion’ delves much much deeper with lush, warm pads serving as a respite piece and adding further depth to Raw Poet. What’s more, it only helps drive home the energy and effect of following track ‘Celestial Spheres’. In ‘Love Goes Around’, there is an introduction of a vocal hook – a technique barely used for the rest of the album. Again, this gives yet more depth and variety to an already solid album. This solid debut album draws to a close with the slightly more modern sounding ‘Face To Face’ which is another real album highlight and ending on a high.

To buy ‘Raw Poet’, click HERE or the image above