Maps and Diagrams – In Circles 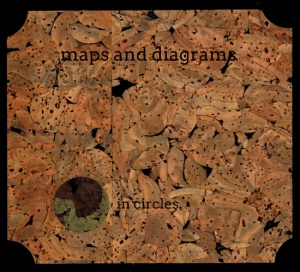 After a few recent posts on beat-based experimental music, we return to the Ambient fold with the latest release on the highly acclaimed Time Released Sound label. It is by the highly acclaimed, prolific artist Tim Diagram as Maps and Diagrams, his main pseudonym for solo projects. It’s his second album for the label – his brilliant ‘Get Lost’ was released back in 2011 which was to be a bumper year from Diagram towers, with 2 records also coming out on Nomadic Kids Republic and albums out on Chemical Tapes, Sutemos and his own Handstitched imprint.

Time Released Sound have been one of the most consistent contributors to the modern Ambient/electro-acoustic scene since they began in 2011 with releases from many of the movement’s finest artists – this includes the likes of Wil Bolton, Antonymes, Fabio Orsi, and Plinth. Doubling the effect of the quality curating from label owner Colin Herrick is his own artistic ability, as he painstakingly makes every release by hand. I could easily run into a few paragraphs on how beautiful packaging he creates however, the best way to experience it is to buy one and see for yourself, if you can get your order in before they sell out!

This is no exception for the latest release in the catalog, ‘In Circles’ sees Maps and Diagrams attempt a follow-up to the well-received ‘Get Lost’ and true to form, Tim’s work somehow manages to excel again. Every album and EP he produces, regardless of which of his many monikers is used is outstanding. Indeed, everything this man touches turns to gold. There is not a clear concept here and nor does there need to be; the sheer brilliance of the music would simply overtake any attempts at this anyway. What I really like about Tim’s work is his use of short and mid-length tracks – which allows enough variation in the soundscapes as they play through to really leave you feeling mesmerised. There are some real highlights in this record so it’s difficult to run through them all without racking up another of my long and whittling ‘reviews’, but by the time ‘Ten Black Cards’ comes in, you’ll notice the hairs on the back of your neck are well and truly standing tall. The plucked strings of ‘Bump In The Night’ offer the same effect, with a prevailing sense of melancholy taking over. The droning granular synthesis of ‘1895’ (Moth Evolution) really takes hold as it sprawls through the 7 minute duration, I really could go on…

To find out more, click the image above or HERE to be taken to the release page where (at the time of writing) you can purchase one of the beautiful physical versions.