As well as an insatiable thirst for sonic delights, I’ve also busied myself this year with several of my own musical projects. One of course is setting up and writing posts here on Irregular Crates but also, I thought I’d make a post on everything I was involved in this year – not to be self-indulgent of course, but in case you didn’t catch some of my work or wondered what else I get up to. I’ll break everything down under the different headings and pseudonyms and post up a Bandcamp player for each.

It was a pretty quiet year for my solo Ambient Spheruleus moniker. I managed one physical release, a split with Strom Noir called Morning which was released on Audio Gourmet as a limited edition 3″ CDr and free download. My only album release was ‘Clearings’, exclusive to the newly set up Spheruleus Bandcamp page. It pooled together a collection of tracks I’ve been returning to or shuffling to the back of the pile for years now, so it was nice to finally release these recordings for people to listen to. I did manage to get my name to a few excellent releases this year on remix duty. Firstly, Ian Hawgood invited me to rework a track from his Wolfskin album, with the record being adapted and re-released on Hibernate. Also on Hibernate, Ian Hazeldine asked me to remix one of his pieces for the Antonymes album There Can Be No True Beauty Without Decay. The only other appearance was an exclusive piece called Ursida on the special Hibernate compilation called Paws For Thought which ties in with a gig held at Cafe Oto on 14th of December

Antonymes – There Can Be No True Beauty Without Decay [Hibernate]

We’ve been collaborating together for well over a year now and recently, at last the very first The Frozen Vaults release came out on Wist Recordings. The Frozen Vaults include Yuki Murata, Tomasz Mrenca, Dave Dhonau, Bartosz Dziadosz and myself – a modern classical quintet experimenting with electronically effected chamber music. The Wist release is part of the Book Report series, a collection of ‘sound reports’ on short stories and novellas. ‘The Machine Stops’ is The Frozen Vaults’ interpretation of the book of the same title, by E.M Forster. To check out samples of the release and order, click on the image below: 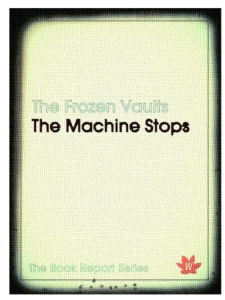 Last year I began to experiment with beat based music for the first time in several years following some new software/equipment. I had my first release under my new Deep House pseudonym ‘Magnofon‘ and this year I took it to the next level with the next level with an EP and album release on my new Warehouse Decay label. Both feature stunning artwork courtesy of photographer Simon James. The Lost Property EP was written with an obsession with urban decay in mind, echoing the over-riding theme of the WDR label. It features five tracks that lean a little more towards Techno than my previous output. After this, I released the debut Magnofon album ‘Fallowfall’ which further explored themes of urban decay, economic downturn and abandoned spaces. The twelve tracks go through all kinds of House and Techno based experiments, with jazz, ambient and dub influences coming through. The only other outing for the Magnofon guise was two remixes for Devroka’s ‘For The Flow’ EP on Warehouse Decay.

Last year I set up Tessellate Recordings, sister label to Audio Gourmet specialising in very occasional limited edition releases. This year I doubled last year’s count by managing two releases: first was the mammoth Earthtones compilation which showcased an international line-up of Ambient material, with the 26 tracks clocking in at 2 hours. Thanks to funds raised by Earthtones, I was then able to release Gone For Walks by Felix Gebhard which featured 4 tracks of field recordings, acoustic/electric guitar and experimental sound. It was released as a limited edition CDr which is still available. You can check out both releases via the Bandcamp players below

And now onto where my foray into running small record labels began, my netlabel Audio Gourmet. This year saw the lowest release rate yet on this label as I concentrated on some other projects. However, there was some real quality 15 minute EPs this year. 2013 began with the Spheruleus split with Strom Noir mentioned earlier (essentially 2 AG EPs) and then an EP from Caught In The Wake Forever followed. Then in June, a collaborative EP from Sima Kim and Elintseeker was released before the year was rounded off with the electro-acoustic sounds of Western Skies Motel. Each EP is available as a free download and you can check them all out by hitting play below.

Finally, consuming the bulk of my time as far as organising label releases is concerned is Warehouse Decay. 2013 was this Deep House/Minimal/Techno label’s first year of operation, bearing a total of 8 EPs, an album and a limited edition CDr sampler. The label kicked off the year with a release from Devroka, who usually records Ambient music as Specta Ciera, followed by experimental Techno artist USRNM. Next up we released Tim Diagram‘s first experiments as Louper and then Magnofon‘s second EP. Polish artist Fau followed before we welcomed Darren McClure who operated as Dokun. Next up was Portuguese artist Hoxiun followed by UK Tech House artist TwelveTen. 2013 was then rounded off with the label’s first album – Fallowfall by Magnofon