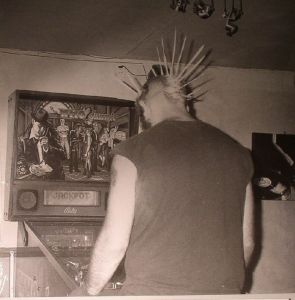 Ever after something that little bit different, we were refreshingly surprised to discover ‘Radio Days’ by Danish artist Uffe, more so that it doesn’t sound quite like the punk-rock cover image! Radio Days is an album of curious electronic experiments which is extremely listen-able, not least due to the sheer variety yet cohesiveness of sounds on offer. House, Techno and other beat-based electronic music can often be quite long, mainly so that it can be played and manipulated by DJs – it is always nice to see artists that approach the LP format with care for the listener – creating tracks of short to medium length and with plenty of variation along the way.

‘Curtains’ opens out the record, permeated by its live bass and vintage keys followed by the deeper and slightly darker ‘Die For You’. The broken beats and deep, heavy bass of ‘My Luv Was Reel’ continues the deviation before the disco-tinged guitar riff interlude ‘Space Loop’ takes over. ‘I Can Show You High’ brings in the soul, with male and female vocals – the latter reminding of Erykah Badu. ‘Your Reality’ slows things down with piano and vox and then ‘Saw You Laughing’ brings back the weirdness all over again. ‘Lemon Nights’ is at House speed with rhodes keys, claps and 80s synths. The final part of the album includes the stand-out Hip Hop track ‘For A While’ and then a couple of varied versions of album cuts. Thoroughly recommended!