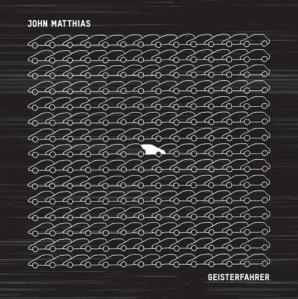 Recently we were sent the terrific new album by John Matthias on the Village Green imprint, which is out now. We were even more fortunate in that John was happy to spare us a little to conduct an interview about ‘Geisterfahrer’ and his work.

The thirteen tracks of Geisterfahrer are presented as a raw sort of chamber music which straddles the lines between Modern Classical and Folk. Matthias incorporates violin and guitar as the main ingredients for this suite, also supported by piano and voice. Add to this John’s own Neurogranular Sampler and the reverb-rich recording space of a 700 year old school and the elements are in place for a breathtakingly beautiful record.

It opens with the title track and its layers of strings before a pair of guitar and vocal pieces follow which immediately let you know that this album is a rich and diverse tapestry. Track 4 ‘Black Bank Road’ is pure piano, with the notes being allowed to ring out into the recording space, reminiscent of Part, Budd or perhaps John Cage. Strings return in the haunting ‘Close Knit’ which has the subtlest of electronic influence and accompanied by the piano again. The album really hits its stride here. Before the sadness of the violin is allowed to envelope this recording, the guitar and voice return in ‘Jackie Bouvier’. This serves to break up the album and hold your interest; the tracks flowing effortlessly from one to another. Stark piano returns with the faster ‘Climbing Walls’ and a filmic drama prevails here. ‘Birdsong’ enters, continuing the theme of faster playing as Matthias’ violin tells yet another story. This faster pace in the preceding two pieces serves to really drive home the effect of ‘Rotate’, a really isolated piano piece which is one of the shortest tracks on the album but possibly one of the most effective given the tension that was built in the two prior pieces. ‘Cross My Mind’ is a rich modern classical track that will appeal to fans of Dustin O’Halloran, Peter Broderick or Olafur Arnalds – the sweet spot hits as violin and piano combine. At this point, the absence of John’s voice becomes apparent and therefore ‘Burning Mouth’ is a welcome sorbet. This is followed by the instrumental ‘Stolen Guitar’ which is the perfect companion piece to the previous track – a sort of echo. This remarkable collection of recordings concludes with ‘Burke and Wills’, one last dramatic violin piece. Highly recommended

There is a rawness to the recordings and as you listen it feels if you are in the same room as the music is being performed.
After that introduction, at this point you are urged to check out Geisterfahrer and hear it for yourself.

We caught up with John to fire him a few questions…

IC: Hello John, pleased to meet you. How are you?

IC: Firstly, how long did it take to compose Geisterfahrer and could you describe the processes and recording sessions that took place on the album?

JM: The work started in December 2012 –several tracks on the album were developed with Andrew Prior as the soundtrack to the dance theatre work ‘Eden’ by the Manchester based group, ‘Company Chameleon’. The production was choreographed by ex-Rambert dancers Jonathan Goddard and Gemma Nixon and was premiered in February at the Lowry Theatre in Manchester. It then toured the UK including two dates at The Royal Opera House, but all of the music had to be finished by the end of January 2013 so we were on a very tight schedule! The rest of the record was recorded in two days in a 700 year-old school (now a community centre) in Devon.

‘Eden’ was about a very claustrophobic and internal world, so we decided to use a lot of the instruments and textures we have been developing over the last few years at Plymouth University, which trigger live sounds using artificial neurons. One instrument in particular, developed with Jane Grant, Tim Hodgson, Nick Ryan and Kin Design is called The Neurogranular Sampler. These produce a very internal rhythmic feel which worked very well with the effects that dancers and choreographers wanted to create. We also used some of the sounds which I had created whilst working with a group from Leicester University on a research project looking at Tinnitus. I sonified some of the firing patterns which they were getting from their models of the Dorsal Cochlea Nucleus –part of the inner ear which receives signals both from body movement and from the auditory nerve. These sounded especially dry and internalised, so we went with that..

The two-day session in the school was all about the acoustic. It is a really amazing building –with stone walls, and a wooden floor and seating with a tiny headmaster’s office at the back and a beautiful grand piano on stage! –so the producers, Simon Honywill and Jay Auborn used microphones all over the building, some very close, several a few metres away, a few many metres away and one in the Headmaster’s office…

We also took an impulse response reverb to ‘capture’ the sound of the room and used it as a convolution reverb on all of the other sounds on the album –so we can carry the sound of the room with us. In fact when we play live, as we did on Radio 3 the other day, we take that room around with us to give us that sound –a room in our pockets!

IC: Could you tell us a bit more about the Neurogranular Sampler?

JM: The Neurogranular Sampler is a software musical instrument which is controlled by an artificial neural network. Short sections (grains) of live sounds played into it are re-triggered when the any of the neurons in the network ‘fire’. It was developed at Plymouth University with Jane Grant, Tim Hogdson, Nick Ryan and Kin Design over a 5 year period which included outings in various different projects and topologies, including The Fragmented Orchestra (Jane Grant, John Matthias and Nick Ryan) (www.thefragmentedorchestra.com) and Plasticity (Jane Grant, John Matthias, Nick Ryan and Kin) http://blog.bowers-wilkins.com/sound-lab/lovely-film-of-plasticity-installation-at-british-film-institute/

The neurons in our nervous system are electrical. The electrical charge on their membranes changes as the neurons receive signals from other neurons to which they are connected from long tubes called axons at junctions called synapses. When this charge exceeds a particular threshold, the neuron ‘fires’ an event and a sharp electrical signal is sent down those axons to all the other connected neurons.

The firings of the network can exhibit amazing patterns, which change according to how particular neurons are stimulated and how the strength of the neural connections are updated (this is called synaptic plasticity). This means that the sounds which are re-triggered when the neurons fire also have the same rhythmic patterns which are correlated but not predictable in advance.

You play live sound into the computer which uses the Neurogranular Sampler as a plug-in, and you can control the number of neurons in the network and how they are connected. You can also control the duration of the grains which are re-triggered and how much the network overall is stimulated by noise.

IC: Is there a concept to Geisterfahrer? Could you tell us a little more about the album?

JM: Geisterfahrer is a German word for someone driving the wrong way down an Autobahn –I love the fact that they have a word for this –in fact my sister lives in Germany and says that there is often a report on the radio about a Geisterfahrer here or there….Really. In Germany.

The album itself is really a set of minimal compositions and songs which are all based on riffs, tunes and textures –I wanted to make something that was hardly there but flowed and combined instrumental short compositions which were song-like in form with songs themselves.

IC: To what extent do your studies in Physics influence your music, if at all?

JM: Well –the Neurogranular Sampler has its roots in the physics of complex systems. I am very interested in these and how the local rules of these systems, how the small elements interact, for example, affect the collective properties. I did some work in the early 1990s on traffic flow systems (back to Geistefahrer..) and how the behaviours of drivers affected what happened in the traffic hours later –this is in fact best modelled as a traffic wave which I find really interesting. Things as fluid. So in answer to the question, I see most things in physics terms really, although you must understand I am not interested in any kind of music that is an illustration of physical principles. There is so much dreadful stuff out there which could be filed under this banner. Music has to move you. End of story.

JM: It was very exciting. They are truly talented artists with their own vision of what they want to do and I was a big fan when they asked me, so it was an honour. I remember at the time that they were starting to take charge of their own destiny much more at EMI –this included getting Stanley Donwood to do their artwork and getting me in (Thom was a friend of mine at University) to play the violin. It was my first big session and I was an unknown quantity to the producer of The Bends, John Leckie. It was myself and a female cello player, Caroline Lavelle in the string section in the session, and as the violinist, I lead the playing, which is a standard procedure in string ensembles..,,then Thom told me afterwards when we were having lunch that she played the cello on Unfinished Sympathy…..

I have been very lucky to have worked with them..and Thom very kindly offered to do a remix of Cortical Songs (John Matthias and Nick Ryan) which turned out to be absolutely amazing..and I was very pleased that he has been including it on some of his DJ mixes –a mix that he did for Mary Anne Hobbs a couple of years ago for example..

IC: Who are your influences, musical or otherwise?